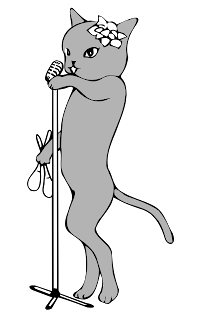 ok so i've never actually seen this show but i'll try to explain who these actresses are as best as possible without saying their names .they starred in a tv show together a couple of years ago and were roommates in real life .

the ugly one had a beard boyfriend(or would you call him a merkin?) and the roommates were really a lesbian couple.the cute one said she moved out because she was allergic to pussy(aka they broke up), then ended up being the best friend(aka girlfriend) to a closeted blonde singer who has many cats.of course ,the cutie posted pix with her face buried in the blondes cat.

the cute one loved drama and decided to cheat with another closeted actress from the show.the blonde wrote a full cd of love songs about their failed romance.
Posted by The D at 6:00 PM