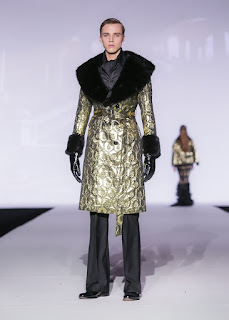 i haven't "done" lafw in a billion years but i've been super stressed out and decided to take the week off.i was supposed to do new york fashion week but somehow forgot :-(

i have no idea why style fashion week insists on having their shows on top of a sidewalk water fountain.way too many people wading through wet and tonight had the added bonus of smelling like sewage.some company was handing out thai food in an unlit corner by the port o' potties. of course there was no place to sit and eat plus no light to see what you are eating.Dallas doesn't do those kind of lines so i kept walking .

lo and behold i see old school cutie mr kato kaelin. i'd still smash but unfortunately I was too sober to say hello. Malan Breton has such a sexy voice and I was excited even though the show was really late. the theme was 1930s gothic with amy winehouse beehives.my only complaint would be that the soundtrack was ambient noise instead of actual music.the clothes were incredible to say the least .of course this would be a perfect time to post pictures but since this blog doesn't pay my rent .... {kanye shrug }.

update: so malan's pr person emailed me some pix and I posted my favorite male look
Posted by The D at 10:34 PM